Monster Men Video Podcast: Two buddies talking horror and the paranormal. Pull up a seat and join us. This time out we unearth Found Footage Horror Movies

Found Footage movies are popping up everywhere it seems. You know, those movies supposedly filmed by one of the characters, complete with a shaky camera and people who continue to film despite the fact that they are being attacked by a ghost, monster or other supernatural entity. (Like a troll.) Typically there are no survivors and all that's left is what they filmed. The Blair Witch Project and the Paranormal Activity series are two good examples of this kind of movie.

Join the Monster Men as we discuss some of the best, and worst, found footage movies. The films include the upcoming "Paranormal Activity 4", "Megan is Missing", "Troll Hunter" and the REC films, (REC) and (REC)2. Also, in our Comic Book Update segment, we review the Kolchak: The Night Stalker comic book series.

The Monster Men video podcast is a lighthearted discussion about dark topics. We cover horror, the paranormal and most anything else that goes bump in the night. And we do it with a sense of humor.

Find more episodes of Monster Men here on our YouTube channel: Monstermen13 or at http://huntershea.com/monster-men-podcasts/ and you can also join us on Facebook at http://www.facebook.com/monstermen13. 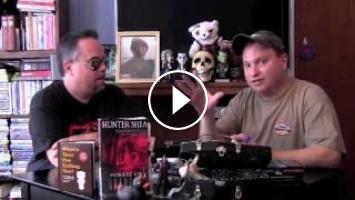 Monster Men Video Podcast: Two buddies talking horror and the paranormal. Pull up a seat and join us. This time out we unearth Found Footage Horror Mo...