Real paranormal video! Ghost hunters catch another ghost EVP recording on tape at the haunted Shoal Creek, the site of an Indian massacre in Austin, TX. This is part two of the paranormal investigation filmed at the haunted Shoal Creek in Austin, Texas. Gideon White was killed with several others during the 1842 massacre at Shoal Creek. No one is certain how many of the victims were buried at the site. (White's grave at nearby Oakwood Cemetery is also haunted.)  There are many other unmarked graves at Shoal Creek. Many victims of cholera and yellow fever were hastily buried at the Creek. These include soldiers who camped at the creek during the Civil War, and those who served with General Custer during his Reconstructionist occupation of Austin. Most of those bodies were later removed and reburied at Arlington National Cemetery, but about 35 graves were never found. Then, in April 1915, a flash flood took even more lives along the banks of Shoal Creek. They report that bones were exposed from unmarked graves!  Are there real haunted places and is this one of them?  Will paranormal activities be captured in this investigation?  Watch and find out!

Make sure to watch “Massacre Ghost Caught on Tape" for the amazing EVP Recordings caught in the first part of this paranormal investigation. ► http://youtu.be/uCfAjK4n7nw?list=PLBD0EE72D080BF2D9

SUBSCRIBE AND JOIN THE SEARCH FOR THE UNEXPLAINED.
http://www.youtube.com/subscription_center?add_user=alejandroinaustin 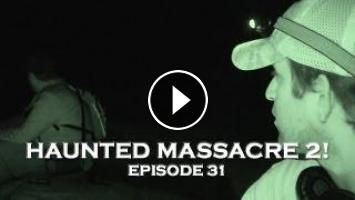 Real paranormal video! Ghost hunters catch another ghost EVP recording on tape at the haunted Shoal Creek, the site of an Indian massacre in Austin, T...