Jason Haxton owner of the Dibbuk Box will be telling his story and answering questions pertaining to his ownership, and the horrific paranormal events that occurred. The Dibbuk Box has been featured on SyFy's Paranormal Witness, and recently the subject of the movie, "The Possession".

The Dibbuk Box owner has been the director of a mid-size museum for the past 10 years. He has studied American antiques and ancient artifacts for the past 26 years, collected and researched Mayan pottery for his thesis in the humanities, and has lectured on art history, paranormal & ancient art for 6 years at a mid-size liberal arts university. He currently is working on his Doctorate in Education.

Prior to his Museum work, he was a university administrator for over 10 years. He has recently worked on several projects with the Smithsonian Institute Museums, served as a researcher/benefactor with the state capitol of Missouri, and a lecturer with his state's arts council. He is a member of several local historical groups.

He facilitates exhibits that have served almost 3-million visitors across the USA and travels frequent overseas with exhibits to Germany, Russia, Australia, Canada, and England. He has received federal grants for curriculum development for schools across the nation, and for preservation & protection of artifacts.

Kevin Mannis, one of the original owners of the Dibbuk Box and featured story on SyFy's Paranormal Witness.
The Dibbuk (or Dybbuk) Box was a wine cabinet said to be haunted by a spirit or demon related to Jewish Folklore.

Mannis once owned a small antiques and furniture refinishing business in Portland, Oregon. In 2001 Mannis bought the Box at a local estate sale. The box had previously belonged to a Polish Holocaust survivor named Havela, who had escaped to Spain and purchased it there before moving to the United States. Havela's granddaughter told Mannis that the Box had never been opened because a dibbuk was said to have lived inside it. Mannis offered to return the box, but the granddaughter refused and did not want anything more to do with it.

Mannis claimed he experienced a series of horrific nightmares while in possession of the box. When the box in the basement of his furniture shop, an employee heard glass shattering and other things breaking despite the fact that no one was down there and the basement had been locked up. His mother suffered a stroke on the same day he gave her the box as a birthday present. Mannis managed to sell the box to another owner, but as the box passed on from one person to another, they each experienced supernatural happenings and strange health problems. 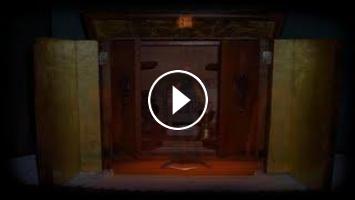 Jason Haxton owner of the Dibbuk Box will be telling his story and answering questions pertaining to his ownership, and the horrific paranormal events...