Real Scary Ouija Board Gone Wrong and evidence of a demonic possession captured on Film in 2009 during a live paranormal investigation from the Villisca Axe Murder House in Iowa. The video your about to see is disturbing and shows aspects of real demonic possession.

Demonic possession is held by many belief systems to be the control of an individual by a malevolent supernatural being. Descriptions of demonic possessions often include erased memories or personalities, convulsions, "fits" and fainting as if one were dying.Other descriptions include access to hidden knowledge (gnosis) and foreign languages (glossolalia), drastic changes in vocal intonation and facial structure, the sudden appearance of injuries (scratches, bite marks) or lesions, and superhuman strength. Unlike in channeling or other forms of possession, the subject has no control over the possessing entity and so it will persist until forced to leave the victim, usually through a form of exorcism.

Please subscribe to our you tube channel for the latest in our original paranormal based genre videos. 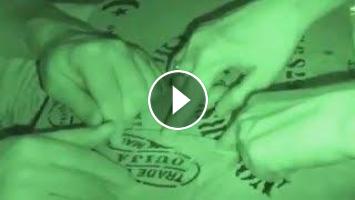 Real Scary Ouija Board Gone Wrong and evidence of a demonic possession captured on Film in 2009 during a live paranormal investigation from the Villis...