Top 10 Most Haunted Museums In The World
1. Vent Haven Museum – USA
The museum focuses on ventriloquist dummies. Here is home to 700 ventriloquist dummies with various kinds of exaggerated facial expressions.
Sometimes, these dummies show anger, astonishment or happiness, but either way their big eyes and eyebrows can give people the chills.
2. Museum of Death - Los Angeles
The museum focuses on topic of death with the most number of exhibitions related to serial killers like John Wayne Gacy and bloody photos from different crime scenes and car crashes.
It has models of various execution "utensils" and coffins. Visitors tour the museum, they may feel the breath of Death on their necks.
3. Mummies of Guanajuato – Mexico
Exhibit more than 100 mummified bodies buried during a cholera outbreak across the city in 1833. The bodies were disinterred from 1865 to 1958.
Because some of the dying people were actually buried alive, keeping their facial expressions of sheer fear and horror to this day.
4. Musée Dupuytren – France
Located in Paris of France, the museum was built in 1835 by Mathieu Orfila, a famous toxicologist and chemist to introduce diseases and malformations to the bigger public.
Musée Dupuytren now has more than 6,000 pieces, including malformed human organs, Siamese twins, the brains of aphasic patients and anatomical wax models.
5. Glore Psychiatric Museum – Missouri
Known as the "State Lunatic Asylum No. 2," the museum was built on the site of a former mental hospital and filled with an atmosphere of doom and gloom.
Various kinds of surgical tools and treatment equipment still convey the miserable past treatments of mental issues.
6. Mutter Museum – Philadelphia
The museum focuses on collecting medical malformations, anatomical and pathological specimens and the brains of murderers and epileptics.
Unlike other medical museums, it is known for its Hyrtl Skull Collection, containing the tallest skeleton in all of North America.
7. Cesare Lombroso's Museum of Criminal Anthropology – Italy
Cesare Lombroso's Museum was built by famous criminologist and physician Cesare Lombroso in 1898.
The museum exhibits more than 400 human skulls because Lombroso believed in a strong connection between abnormal behavior and criminal tendency, and the size and shape of one's skull.
For his study, he collected a large number of bodies and dissected them.
8. Medieval Criminal and Torture Museum – Italy
This is a favorite place of people who want to know the dark side of the Middle Age.
The museum showcases more than 100 instruments of torture, portraying the cruel side of mankind.
According to the reviewer, it was described as "scary", "more gruesome than you can imagine" and "enter with caution."
9. Meguro Parasitological Museum – Tokyo
This is the only parasite museum in the world. Opened in 1953, it has more than 45,000 objects, including one 8.8-meter-long tapeworm taken from the body of a 40-year-old man.
Even if the museum is not big, you need some strong encouragement to finish the tour.
10. Capuchin Catacombs of Palermo – Italy
It is one of the scariest catacombs in the world, the museum has 8,000 mummies.
Some of them were embalmed and sealed in glass cabinets. Others were hanged on the wall, wearing expensive clothes. They were put in different positions.
The mystery of history attracts thousands of visitors every year. 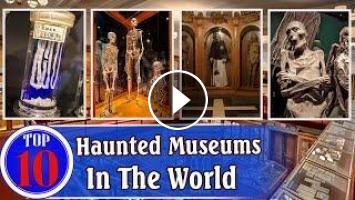 Top 10 Most Haunted Museums In The WorldPlease subscribe to update new videos: https://goo.gl/WHfXcy Do not forget SUBSCRIBENEW VIDEOS: https://goo.gl...